Pandit for Marriage in Bangalore

North Indian Pandit in Bangalore – Bangalore is known as the ‘Silicon Valley of India’ due to its well-established IT sector. It’s easy to witness diversity in the city along with a young population relocating or migrating to build a great career. But the things that always remain with people are their culture, rituals, and customs wherever they travel or live. This is experienced by the people in Bangalore who have come here for employment purpose. They realised that they don’t have any access to knowledge and cultural activities of the customs they adhere to. Exploring diversity has its charm, but nothing is more beautiful than one’s beliefs and rituals. What Bangaloreans often miss is the lack of guidance in performing rituals related to their families. For example, performing rituals with the help of a Pandit ji in marriage in Bangalore. Everyone misses the chanting of mantras, inviting deities, feeding to as many people, birds, etc. as guided by a professional Pandit ji and getting blessings from all.

Pt. Acharya Hari Ram Sharma understands the issues faced by today’s young and dynamic generation and is willing to help people from all walks of life. He is the most accomplished North Indian Hindi Pandit in Bangalore among the clientele. If you or your family needs help with Kundali Milan of a boy or a girl, if you are facing issues in deciding on Marriage Muhurat according to the Hindi calendar or if you want to get the horoscope checked of a newborn baby or your health and prosperity check etc. Pt. Acharya Hari Ram Sharma is there to help.

Being highly renowned as North Indian Pandit in Bangalore for Marriage, he oversees the entire ceremony and performs it as per the traditional Hindu scriptures and sacred texts. He is the best choice if you want true help for all your familial needs or wishes to be married according to the proper Indian wedding ceremony.

Pt. Acharya Hari Ram Sharma is a Post Graduate in four subjects (English, Sanskrit, Hindi and Jyotish). He has been practicing Astrology and Vedic karma-kand for the last 33 years. He has been recognized as a Jyotish and Vastu Ratna.
He has also learnt Astrology from his father, a reputed Indian Astrologer. Over the period of time, he has developed a huge satisfied client base by going through thousands of horoscopes. He has helped clients evaluate the positions of stars in a kundali and the impact of the stars positions’ on an individual and his/her family life.

He is known for providing the most accurate solutions based on Indian Vedic astrology comprising beej mantra jaap relevant to dedicated gods and goddesses, etc. By delivering client satisfaction at every step of their new endeavours, he has earned the respect and the honor of becoming the top Hindi astrologer in India. The list of beneficiaries includes people from all walks of life including students, housewives, teachers, executives, businessmen, politicians, managers, and persons at the top positions who needed simplified solutions to easily sail through difficult times in their lives and make the most out of it.
Since 2009, he has been associated with AstroSage – India’s most reputed astrology website as the senior most astrologer. He offers a range of astrology related services including Kundli Milan, Marriage Puja, Namkaran sanskar, Mundan sanskar, Ann prashan sanskar, Satyanarayan pooja, New Shop inauguration pooja, New Business Opening Puja, Graha Pravesh Puja, Vehicle puja, Bhoomi pujan, and all the karma-kand like Navgrah Hawan, Mahamrutunjya Hawan, Jap, Gayatri Hawan and Jap and Navgrah Jap. Besides Astrology, he has a deep interest in Indian culture and mythology. He has also mastered himself in yoga and meditation.

The marriage ceremony is conducted as per Vedic culture. The marriage rituals consist of the following:

Entry of Bridegroom:
As per marriage Mahurat, Bridegroom first enters in the mandapa and takes his shoes off on the instruction of Pandit ji. The pandit ji chants the Vedic mantras for taking out the shoes.

Asana:
Girl’s father offers an Asana to Bridegroom as a symbol of respect. Vedic Mantras are chanted by Pandit ji.

Madhuparka:
It is very important during marriage ceremony. Curd mixed with honey and mishri is offered by girl’s father to the bridegroom to eat. It is believed that by eating Madhuparka the body becomes pious. Purity is of high significance in the Vedic culture. Without Madhuparka, the marriage is not considered auspicious.

Entry of bride:
The kanya is brought to the mandapa by her family members or her friends. She then takes asana on the right side of the bridegroom facing east direction. All the required Vedic poojan is completed by Panditji.

Kanya Dan:
This is the most important ritual in a marriage. The bride’s father gives away his daughter’s hands in the groom’s hand amidst the chanting of sacred mantras performed by the Pandit ji.

Parikrama or Pradakshina or Mangal Fera:
The couple performs 7 Parikramas of the sacred fire. In the first four Parikramas, the bride leads the groom and in the last three Parikramas the groom leads the bride. This aspect of the ceremony legalizes the marriage according to the Hindu Marriage Act and sanatana dharma’s customs.

Laja-Homah:
At the start of each Parikrama, the Bride’s brother gives Kheel(Puffed rice) in the hands of the groom and the bride. It is offered to the sacred fire by the bride while keeping the palms of her hands over groom’s. This ritual is repeated three times.

Shila Arohan:
The mother of the bride assists her in stepping onto a stone slab kept in mandapa while performing parikrama of sacred fire which signifies a start of a grahasth Jeevan (married life).

Pani-Grahan:
The groom takes the bride’s right hand in his left hand and is vowed to accept her as his wife. Pandit ji chants the sacred Vedic mantras for Pani-Grahan.

Sapt Vachan (Seven Bounds):
Bride and Groom make a promise to fulfil the seven vachans. These seven promises are being chanted by Brahmins from both sides. After making promises, the girl sits on the left side of the groom.

Abhishek:
Pandit ji sprinkles the holy water of Kalash on bride and groom and chants the blessing mantras.

Aashirvad:
The couple receives benediction from the elders by touching their feet together. 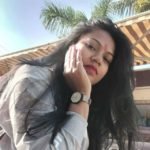 Online writer for close to 9 years, I am passionate about art, culture, traditions, foods, technology, and travel. When I am not writing, you can find me at the park walking & running.

10 Best Wedding Caterers in Delhi with price per plate

I Love You In 25 Different Indian Languages